The Problem With Writing Coincidences

I’ll be writing about the video Coincidence in Storytelling – Writing better stories advice and tips, from the writing advice series I’m doing on YouTube with Jonathan McKinney.

A coincidence in a story is an event that has no foreshadowing and your character didn’t directly cause. It isn’t something the character looked for and it isn’t the consequence of previous action. The coincidence just happens to them and impacts them, and then they react to it

Coincidences can trigger a story, or progress an existing story, but they have to be handled with care. Having too many coincidences in your story can make it weak, and it shows a lack of planning and intent. I’ll be writing about why coincidences are a problem, and how to avoid writing them.

The Problem with Coincidences

When you’re telling your story, you’re trying to emulate life to a certain extent, and because coincidences do happen in life, you can usually get away with using one coincidence in your story.

If something strikingly coincidental and unusual happens in your story, say a character wins the lottery, you’ll find that your audience can go with you. But if you start layering these coincidences then they won’t. It becomes unbelievable and, somewhat, pointless.

That’s not a story, that’s just a series of chance events that a character is reacting to. Even if technically you could have a long series of life changing coincidences happening, because life is random and coincidences are a possibility, it doesn’t make for a good story.

Solving A Problem With A Fluke

When your character goes to find the information and accomplishes that goal, you have a good story. When they chance upon it by coincidence, you have a fluke. And it happens quite regularly in stories that the Protagonist bumps into somebody who happens to have the information they need, or they happen to be in the same diner as criminals discussing their plans.

The accidental information discovery means your character hasn’t struggled, overcome a challenge, and hasn’t learned anything or developed as a person. What they need has just landed in their lap.

When the information that solves a problem for them that they’ve been struggling with throughout your entire story comes to them by chance, it feels unearned. It’s never believable, it’s always a bit of an eyeroll, and it’s completely avoidable.

When you’re writing your character attempting to overcome a problem, you’re essentially trying to figure out overcome that problem yourself. And if you can’t figure out how to do it, writing them chancing upon it is just your way of getting out of that problem easily for yourself, rather than putting the effort in and figuring out what to do. And that comes across. It’s boring and lazy storytelling.

Make Your Character Work for It

You can write a character getting information in the exact same was as they would by accident, but make it entertaining and story-worthy. Say you want them to overhear people talking in a diner, and originally you wrote it by chance. Go back into your story, and make them earn that information. Write them working out where the person who has the information will be to talk about it, write them making the plan to be at the same diner and the same time, with the purpose of overhearing it.

If your criminals are gathering in a diner to talk, your police officer would either tail one of them, or learn that they will be gathering in that spot, and be there with them intentionally to listen in. By making that character active, and learning this information through their own initiative, you’re taking control of that story and making it worth reading or watching.

Seeing characters struggle and push and overcome conflict in their path to accomplish their goals is entertaining. Watching them learn and improve in their competency as their character arc moves forward is entertaining. The struggle is the point of the story. The sense at the end of a story when things have just fallen into place by coincidence, rather than your character pushing them into place, is of disappointment, not satisfaction.

When Can You Use A Coincidence?

If you choose to have a coincidence in your tale, it shouldn’t be the key to solving the entire story. It is better suited to launching your story than solving it, and if it is too big and significant an event being done by coincidence, it becomes boring and unbelievable.

Significant information and key events need to be written with intent, and a coincidence feels lazy and inept.

If you want to tell a story where a series of striking events happen, and in theory they could be coincidences, then you need to pick one to be a coincidence. Everything after that needs to be as a result of direct action taken by your characters in response to that initial coincidence.

What to Write Instead of a Coincidence

When you have simple scenario to write, such as two characters bump into each other in the supermarket, it is tempting to make it a coincidence. It’s not a key event and just helps your plot tick forwards. However, you can still avoid making it feel like a coincidence to your audience by using foreshadowing.

Foreshadowing is how you can build to any event without having to use a coincidence. Narrative Triplets are the perfect way of foreshadowing any event into feeling like it was planned and constructed.

Sew into your story two previous mentions or incidences of your later coincidence, and by the time that third time comes around your audience will feel like it was intended from the start. Something planned like this is much more satisfying.

It can still be a surprise, with subtle foreshadowing, but it won’t feel like an unbelievable coincidence.

If when you get to the end of your story, and there’s a final obstacle your character has to overcome, it might be tempting to let that be easy for them by way of a coincidence because of how much they’ve already been through. It’s often referred to as “deus ex machina” which means that a problem is suddenly fixed by an act of God. A simple coincidence that ties a final bow on your story for your character.

But resist that, make it a challenge, make that final obstacle something your character has to work for and overcome at cost and pain to themselves. A coincidence at the end of your story feels too easy and your audience will feel deflated and unsatisfied.

Coincidences imply you can’t be bothered, or you’re not capable, of writing a complete and well-constructed story. Put the time and effort in, because your story and your audience are worth it.

If when you’re writing your story you find you have written yourself into a situation where you cannot think how to get your character the information they need without a coincidence, take a break. Walk away from it and let yourself think, because if you put the effort in to make it consequences of your characters actions not just happenstance, it’ll be worth it.

J.J. Barnes
I love it when people send me photos of their finished colouring in!

You can order yours with any name or message here in A4 or as an A5 personalised card:
www.jjbarnes.co.uk/art.html

J.J. Barnes is in Stafford.
Photos from J.J. Barnes's post
Stafford
On YouTube I am covering different topics of writing techniques, story craft, and characterisation. Each video goes out at 930 on the Siren Stories channel on a Monday, Wednesday, and Friday.

I’m hoping to help you a better and more confident writer by taking the things I’ve learned over the years and giving them to you.

I reference pop culture books, film and TV to make these videos as accessible and understandable as possible. You don’t need to study to watch my videos, just have a love of story you want to grow and develop.

The world needs more stories, let’s make yours one of them!

Search: Creative Writing Advice With JJ Barnes on YouTube, subscribe to my channel, and start your story journey today!

J.J. Barnes
Mermaids are being pulled from the ocean and cut up alive, their body parts sold on the magical black market.

Lilly and Saffron join forces with a coven of elderly witches, determined to save them... but soon they find things are more complicated, and more dangerous, than they ever imagined.

In paperback, just 99p on kindle, and free to read on kindle unlimited mybook.to/mermaidscurse

By taking the time to foreshadow the end of your story, you are communicating to your audience that you have crafted this story with care.

Emerald's best friend is a genie, trapped in a life of magical slavery, trafficked from master to master. Emerald wants to save her but what, and who, is she willing to risk to do it?

My 3rd book is in paperback, #kindle, & #kindleunlimited: https://t.co/OvI0WqYhMi 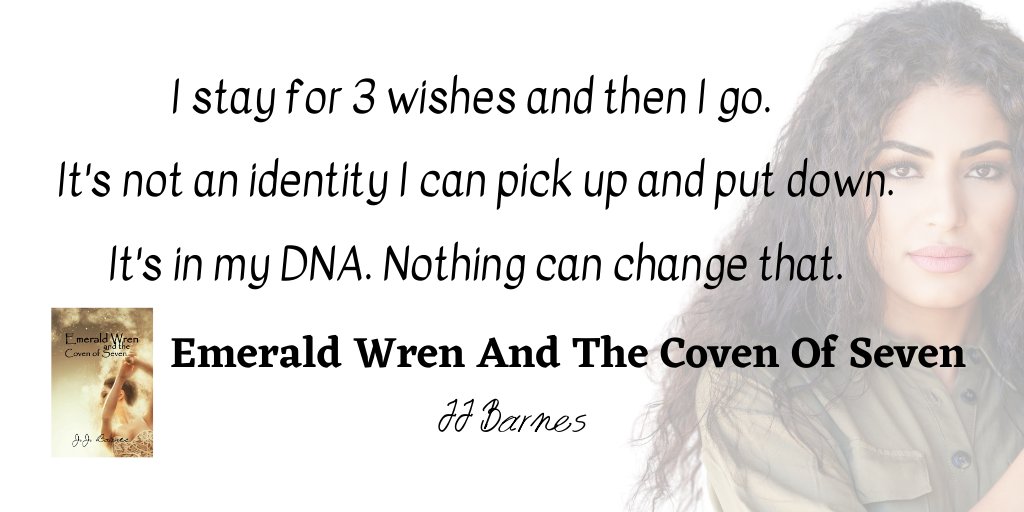 How people deal with their mistakes and weakness tells you a lot about who they are. If they lash out and blame others rather than looking inwardly, they are more morally corrupt and suited to the role as Antagonist.